If you need to send in photographs for a passport application, make sure they meet all the rules to avoid delays in your application.

You must send 1 photo when applying for a passport.

Along with the application for the issue of the passport you have to submit one (1) current photo. The photos for the requested passports should have the following technical specifications: 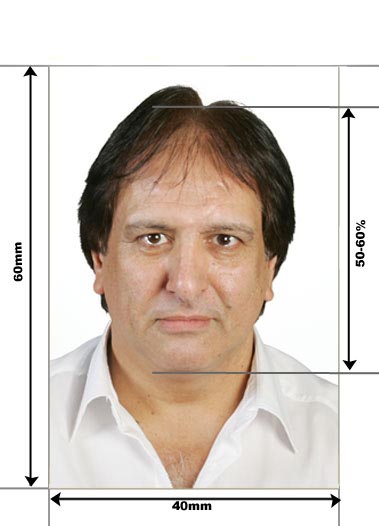 - For people with moving or other health problems should be made an effort of taking the photo as well as possible.

B) Proper way of taking photos

- For religious reasons a person can wear a head cover (for example a kerchief etc), but the face characteristics from the jaw up to the forehead and from the one ear to the other must be in any case visible.

- Also for health problems it?s allowed to cover face characteristics only with a medical certificate.

Examples of appropriate photos referenced to the pose, the expression, the background etc and not to the face dimensions:


Pose
The frontal photo type must be used for the passport's photo. The head's rotation must be less than +/- 5 grades from the center at every direction (up and down, left or right). The shoulders must be "straight". The "portrait style" photos, in which the person looks over the one shoulder, are not accepted.

Expression
The expression must be neutral (without a smile), with both eyes normally open (not wide open) and the mouth closed. The biggest effort must be made, so that the pictures delivered will be according to the current specifications. Smile with closed mouth is not recommended. The person must be entirely alone (without backs of chairs, toys or other faces appeared), looking at the lens with neutral expression and closed mouth.

Examples of not accepted expressions
a. Closed eyes
b. Eyes covered by hair
c. Eyes partly covered by glasses frame

Examples of not recommended expressions
a. Smile and the teeth or the inside of the mouth is visible
b. Eyebrows rise
c. Eyes which don't look straight at the camera
d. Squint
e. Frown

Background
The limit between head and background must be totally distinct in the entire object (bushy hair is acceptable). There must be no shades at the face's background.

Shadows in the eyes
There must be no dark shades in the eyes because of the eyebrows. The iris and pupil must be distinctly visible.

Background sameness
The background must be plain without straight lines or curves. So it must be uniform or homogenously colored, with smooth vacillations of the lightness to only one direction.

Subject and background lighting
The lighting will be spread uniformly in every side of the face. No significant direction of the light must be visible from the photographer's optical angle.

Hot spots
Great attention must be given to avoid "hot spots" (bright areas of light which make the face shine). This phenomenon is usually being caused by the use of a highly bright intensity and concentration. Instead of that it's essential to use expansive light, multiple equal sources or other lighting methods.


Dark glasses or sunglasses are acceptable only for medical reasons. In different situation they must be taken off.

It must be made sure that glasses frames don't cover the eyes.

There must be no light reflection on the glasses. This can usually be achieved by modifying the angle among the source of the light, the object and the camera at 45° (degrees) or more.

Eyes bandages
Use of bandages at the eyes is allowed only for medical reasons.

Focus and depth of the field
The picture must be perfectly focused from the nose to the ears and the jaw up to the hair. This can lead to background obscureness, but it's not a problem. During a typical photographing, for the best quality of the face, the f-stop of the camera lens must be adjusted at two (or more) f-stop under the highest stop opening, so as to achieve enough depth field.

All the pictures will have satisfying depth focus so as to maintain a better analysis from 2 mm at the photographed face. It can be achieved a better picture analysis than 1 mm, if in a test photographing the millimeter signs, placed at the nose and the ears or the face of the person that looks at the camera, are visible.

If the camera lacks of an automatic focus, then the person must be placed always at the best position.

Unnatural color
The unnatural colored light, yellow, red, etc is not allowed. Attention must be given to correct the balance of the white light of the camera. The light will give to the face at the picture a natural tone of the flesh. The "red-eyes" phenomenon is not allowed. The colored photos must be based on techniques of balanced colored light, like for example high temperature of the flash color.

Color or tone of grey gradation
A procedure which aims at exaggerated or deficient exposure of a color or a tone of grey for esthetic reasons is not allowed. The whole of the picture is requested. The teeth and the white of the eyes will be open colored or white (wherever needed) and the dark hair or characteristics (wherever needed) will be dark.

Actinic deformation of the camera lenses
The "fish-eye" phenomenon which is related to unusually big noses is not allowed. There is almost always some kind of deformation at portrait style photographing, but that deformation must be unnoticed during the human examination.

The actinic deformation due to the lens is a phenomenon, which has to be reduced. For a typical photographic system with the object at a distance of 1,5 m up to 2,5 m from the camera, the focal length of the lens must be as much as a typical telephoto lens. For example, for a photo of 35 mm is needed a 90mm to 130 mm focal length of a lens. Practically, about the various optical sensors, the recommended focal length is 2 to 3 times the diagonal of each sensor.

Picture at the center
The approximately middle points of the mouth and the nose must be met at an imaginary perpendicular line AA, which is placed in the horizontal center of the picture.